Net profit of the banking group SG in Russia amounted to 1.3 bln rub in Q1 2017 according to IFRS

"In Q1 2017, the banking group Societe Generale in Russia continued to increase its market positions, both in the retail and corporate segments. We follow our strategic goal of becoming a transactional bank for customers with the willingness to offer new services to our clients. The volume of individuals' funds on demand more than doubled in the last 12 months. Now customers can issue a debit card of the Russian payment system MIR and an international corporate card with an overdraft. In corporate lending, we are growing above the market, increasing our portfolio by 3% per quarter. The rating agency ACRA gave our banking group the highest credit rating at AAA (RU) level with a "stable" outlook, confirming our high level of reliability and stable position in the banking sector", summed up Dmitry Olyunin, Rosbank CEO.

The volume of retail loans issued by the Group in the Q1 2017 remained at the level of Q4 2016 and significantly increased compared to the Q1 2016 (the growth in the volume of consumer lending was almost 100%). The Group continues to hold a leading position in the retail lending market, increasing its market share in issuing loans from 3.3% to 3.7% in the last 12 months, thanks to its strong performance in the consumer lending segment. (The increase of market share from 2.2% to 2.7% for the same period)

Thus, the volume of mortgage loans issued in Q1 2017 is 18% higher than in the same period in 2016, while the market share for lending increased from 2.3% to 2.5%, respectively. In Q1 2017, DeltaCredit is among the six leading banks in terms of mortgage lending (according to Rusipoteka analytical center).

Rusfinance Bank is consistently ranked in TOP-3 banks on the car loans market with a share of over 15% in terms of issuance volumes in Q1 2017. The total volume of auto loans issued in Q1 2017 is 68% higher than in the same period in 2016. The bank continues to actively participate in the state program of preferential car loans, within the framework of which it takes the second place (according to the Ministry of Industry and Trade).

At the same time, the Group continues to build up its liabilities portfolio, focusing on current accounts of individuals. In Q1 2017, our market share in this segment increased from 1.4% to 1.5%.

In Q1 2017, Rosbank and Societe Generale continued to expand their business in the banking services market to the largest Russian and international companies.

The key transaction in syndicated lending was a loan agreement amounted to USD 2 bln with one of the leaders in the telecommunication sector, while Rosbank and Societe Generale acted as authorized lead arrangers.

In the Eurobond market, Rosbank and Societe Generale acted as the joint lead managers of the placements of Credit Bank of Moscow, Severstal and United Company RUSAL.

RB Leasing provided financing to the First Freight Company in the amount of RUB 3 bln through a return leasing instrument, the subject of which were about 1,5 thousand units of new rolling stock. The leasing contract was concluded for a period of 10 years, financing was provided by Rosbank.

In March, the Bank entered into a derivative transaction with PJSC RZD to raise 157 mln Swiss francs and place USD 150 mln.

Reactivation of lending in the retail business from the second half of 2016, which continued in 2017, allowed the Group to stabilize its retail loan portfolio in Q1 2017.

The corporate loan portfolio continued to grow, having increased by 3% since the beginning of 2017 (excluding forex effect) against negative dynamics in the market during Q1 2017 (-1%).

The banking group SG in Russia aims to cooperate with the most reliable borrowers, carefully assesses the paying capacity of the clients in the new economic conditions and gives priority to the quality of the loan portfolio.

During Q1 2017, the Group's customer liabilities portfolio increased by 4% (excluding forex effect). This dynamics is mainly due to the increase of funds on customers' current accounts. At the same time, the volume of individuals' demand deposits (excluding forex effect) has more than doubled in the last 12 months, which fully corresponds to the Group's goal of developing a transactional business.

In Q1 2017 the Group's net interest income amounted to RUB 9.2 bln rubles, decreased by 8% compared to Q1 2016. Negative dynamics is mainly due to a decrease in interest rates on mortgage loans, as well as a revision of interest rates on corporate loans.

Allowances for provisions amounted to RUB 1.1 bln in Q1 2017, decreased almost three times compared to the last year. The effect of provision reduction was achieved mainly due to the restoration of the quality of the retail portfolio and the improvement of debt collection processes as well as FX mortgage portfolio refinancing effect in 2016. The quality of the corporate portfolio remains at a high level.

The Analytical Credit Rating Agency (ACRA) assigned the highest credit rating at the AAA (RU) level to the banks of Societe Generale Group in Russia with a "stable" outlook.

Rosbank has a high level of assessment of its own creditworthiness due to a comfortable level of capital adequacy, an adequate risk-portfolio and an adequate position on liquidity and funding.

Rosbank and its subsidiaries maintain strong liquidity position and capital ratios that significantly exceed the mandatory standards set by the regulator. The international rating agencies Fitch Ratings and Moody's Investors Service confirmed the ratings of Rosbank, Rusfinance Bank and DeltaCredit in Q1 2017 at the level of the sovereign rating of the country. 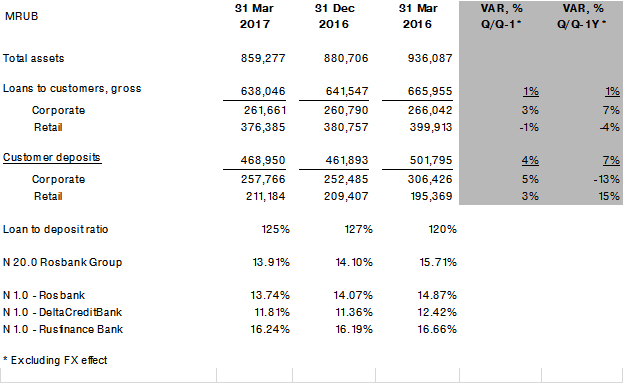 Key indicators of Statement of Profit and loss