Password restoring by associative row, the influence of the market volatility on FX rates that a case on the development of a personal account – Rosbank summed up the results of Tech. Madness hackathon 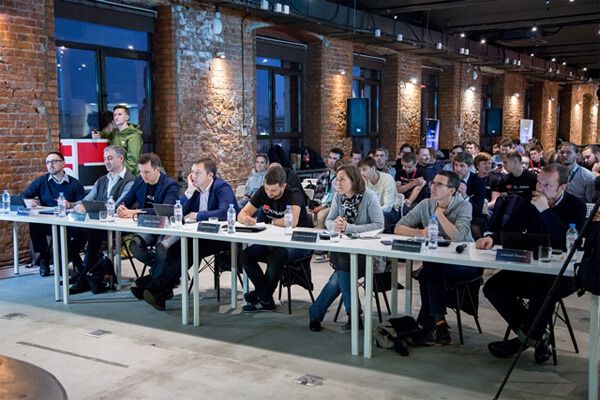 Rosbank held a hackathon for program product developers called Tech. Madness and we are ready to share the results. The hackathon started in the evening of November 16 and lasted 48 hours. The developers had to create the prototypes of fintech-products with the help of the experts of the bank. This year, a new mechanism was used: the tasks were not revealed before the start of the competition and only themes was announced like mobile and internet bank and the stack of technologies recommended for use. The prize fund the participants fought for was 500 000 rubles.

More than 200 applications were sent for the participation in Tech. Madness and Rosbank experts selected 100 best participants from 20 teams. The youngest participant was 18 years old and the oldest one was 39.

The majority of the participants spent all 48 hours on the hackathon not wanting to distract from work to have a rest or to sleep. Lectures on fintech by the experts of Microsoft, Deworkacy and Tokenbox.io were organized during the hackathon for the participants to switch their attention and acquire new knowledge.

The results of the work were assessed according to 5 criteria, and one of them (technical realization) was assessed by the bank experts before the final stage. The jury of 8 people from the management of SG Russia (Rosbank, Rusfinance Bank, DeltaCredit Bank and Societe Generale Insurance) assessed other 4 criteria – the functionality of the solution, design, the potential for the integration into bank systems and the ability to present the idea.

“RxProjectMobile” team got the victory and 250 000 rubles for developing the case by Retail team called “Password restoring system to enter the application with the help of association of the picture and voice identification.” Four young men (Nikita, Ibragim, Yura and Maxim) developed the idea and created a really interesting product that was already placed in the backlog for realization by Retail Digital team.

The second place and 150 000 rubles was won by “Life laboratory” team that solved the case of Corporate and investment business on the forming of the price of an asset on a volatile market. The team did not only solve the case but also added extra options to increase the sensitivity of the system depending on the efficiency rates of deals.

Alexander Khmelevsky got the third place and 100 000 rubles. No matter that his team mates left him and refused to fight till the end, he kept on working and created an ergonomic interface with required business logic. It is a good example of the determination and self-confidence.

Comparing with the event of the previous year, the format of hackathon changed significantly. It was a real challenge for teams. Practically everyone accomplished the tasks. We will continue talks with the most dignified and we want them to integrate into our team. The main goal of this hackathon was the search and attraction of the young talents. I think that the young age of the participants is a plus. We see that these young people adapt quickly, understand everything, and are able to offer an unordinary solution. As a result, the attraction of the young developers is rewarded hundredfold.