Perizat Shaikhina appointed as head of corporate block in Rosbank 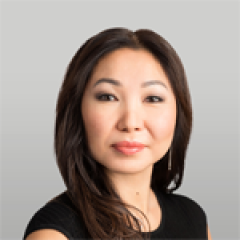 Acting Сhairman of the management board

Perizat has extensive experience in credit risk management and thorough knowledge of the bank's corporate clients. She has built an effective risk management system within Rosbank, that enables the bank today to keep the high quality of corporate and retail loan portfolios. I am confident that Perizat will continue the successful development of Rosbank's corporate business in line with the recently announced strategy.

In 1998-2000 Perizat Shaikhina was responsible for business development with international companies in ABN AMRO (Kazakhstan, Holland, Russia). In 2000-2003 she was in charge of expanding cooperation with Russian companies in the financial group US-Russia Investment Fund. In 2003, Perizat began to work in the corporate risk department of BSGV (Bank Societe Generale Vostok). In 2007, she headed the risk division, supervised credit, operational, market risks and compliance. Shortly after BSGV merged with Rosbank (2011), Perizat became Chief Risk Officer and Deputy Chairman of the Management Board of Rosbank in early 2013. On February 1st, 2018, she joined the Corporate Block as director of corporate business.

Perizat graduated with honors from Karaganda State University. Has an MBA degree in general management and finance of the business school E.L.Cox, Southern Methodist University in Dallas (Texas, USA).