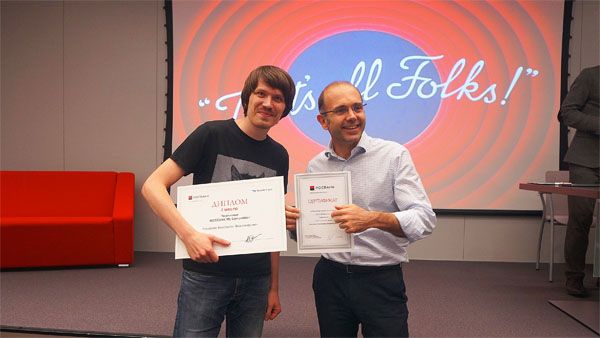 An awarding ceremony of the finalists of online data processing contest called ROSBANK ML Competition was held in the Head Office of Rosbank. More than 60 people, including 40 guests, participated in the event.

ROSBANK ML Competition was held on boosters.pro site. The goal for the participants was to solve 2 problems during a month, namely to forecast the customer outflow based on the generated card transaction dataset for 3 months of privileged bank product service and to forecast customers’ POS-transaction volume for the following 3 months.

The main directions of our changes are processes, data, technologies and the ways we work. Digitalization leads to the multiplied increase of data volume that is necessary to process. We are interested in extracting maximum use of this information. We aim at making decisions based on the processing and analysis of data and we are ready to invest in this field. We are ready to try new approaches, to fail and find useful insights that will make our products better and improve the efficiency of our activity.

The event consisted of two parts. The employees of the companies of Societe Generale Group in Russia and the participants of the contest had a look at the project presentations that were prepared by the winners and exchanged experience in the field of data analysis using the advanced approaches of predicative analytics with the use of machine learning.

An awarding ceremony of the winners that were determined by the results of submitted online calculations was held. The participants listened to the finalists’ reports, asked questions, found out more about the approaches and difficulties that popped up during the decision-making. Konstantin Nikolayev was the first, Kirill Khrylchenko occupied the second place and Evgeny Semenov was the third.

Separate report contest was held among the participants from the top-30 that did not occupy the prize places. Seven participants showed their presentations one after another and “The Best Report” was elected as a result of the voting that was carried out among the presentees. The diploma was given to Nikita Churkin.

At the end of the event Dmitry Smirnov, Head of Rosbank Data Lab, gave a speech and said that it was the first time for Rosbank to organize an open data analysis championship and it turned out to be successful. He noticed that such online events not only help to solve the problems but also are the perfect practice of brand promotion among data researchers community.