Rosbank Press Service was awarded for the best newsbreak of 2017 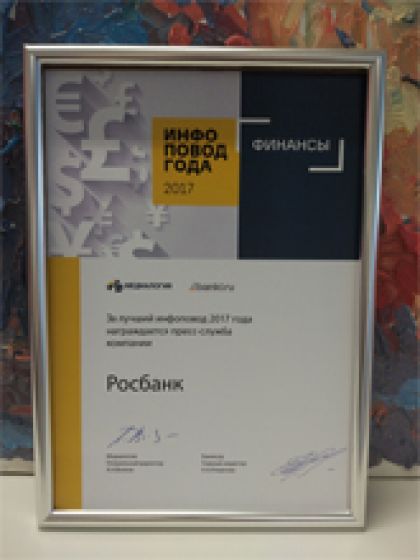 “Medialogy” company and Banki.ru portal organized an awarding ceremony of the “Newsbreak of the Year-2017” prize in “Finance” nomination. Rosbank Press Service was the best in 2017 for the presentation of the project called “Robot-artist”, created by Rosbank jointly with FANUC company.

“Robot-artist” is an interactive project in an urban environment which drew pictures in impressionism style with the help of the visitors of Sokolniki park and the participants of Innoprom exhibition. Impressionism style was chosen for good reason: this style was born in France and it brought glory for Monet, Pissarro, Degas, Renoir and other artists. The main difference that distinguishes impressionism from other styles is the drawing technique of jerky strokes. Robot drew using the same technique. It scanned the colors of the clothes of everyone who wanted to take part in the drawing of a picture and made a few strokes of the needed color on the canvas.

As a result of the project, about 100 publications were issued in federal and regional printed and Internet media. Channel One, Russia-1, Russia-24, RBC TV, Public Television of Russia PROBusiness channel, Sverdlovsk regional television and Radio Montecarlo covered the event in their footages and programs.

Annually “Medialogy” company and Banki.ru portal present the research on the best newsbreaks of the financial market. The most interesting newsbreaks (events/topics/footages) that were created by press services and that drew a response in the mass media were taken into consideration. The data is analyzed by the “Medialogy” information analysis system that bases on MediaIndex, a PR efficiency rate that considers the influence potential of the mass media, positive/negative and noticeability of the messages.