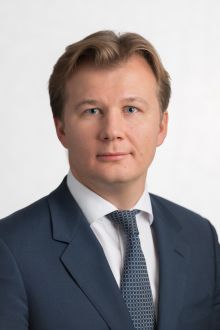 The Board of Directors of Rosbank has engaged the steps to appoint Ilya Polyakov as Chief Executive Officer and Chairman of the Management Board, subject to Bank of Russia approval. Ilya will replace Dmitry Olyunin who, after four years of services within Societe Generale, has decided to return to VTB Group.

Currently First Deputy Chairman of the Management Board in charge of Corporate and Investment Banking activities in Russia, Ilya will start to serve as acting CEO, effective April 14th and prepare the transition of his present responsibilities.

We are delighted to appoint Ilya. His deep knowledge of the Russian clients and a longstanding banking experience within Societe Generale as well as Rosbank will be essential to lead the team to achieve our Group's ambitions in Russia under the recently announced strategy.

In the past few years, we have implemented a successful transformation and positioned Societe Generale to become the leading international banking group in Russia. We warmly thank Dmitry for his key contribution to this tremendous team effort and wish him all the best for his future professional endeavors.

Ilya Polyakov became First Deputy Chairman of Rosbank in charge of all wholesale banking activities in September 2016. He joined Rosbank in 2012 as Head of its Corporate Block as well as Societe Generale’s Head of Coverage and Investment Banking for the Russia/CIS Region.

He was previously global Co-Head of Metals & Mining within the Natural Resources and Energy Department since 2011 in addition to his responsibilities as Senior Banker in charge of global relationship and strategic advisory for several Metals & Mining clients in Russia and the CIS Region.

Born in 1979, he has graduated from HEC School of Management in Paris and from Moscow University of International Relations (MGIMO).