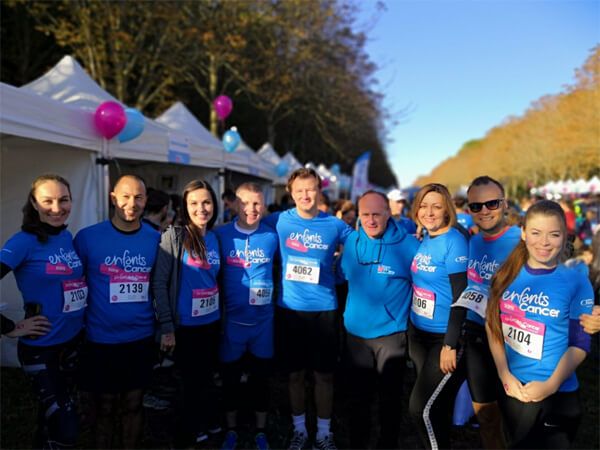 On September 30, an annual international race “Enfants sans cancer 2018” organized by the French fund called “Imagine for Margo” was held for the seventh time in Saint-Cloud Park in Paris. More than 20 employees of the companies of Societe Generale in Russia from different cities joined the initiative. They collected the maximum sum of donations during the fundraising campaign for the Imagine for Margo fund.

“Let’s do this Together!” team, that consisted of the employees of Societe Generale Group in Russia as well, collected 90800 euro in total and it was second in the amount of donations among 219 teams that took part in the race. The contribution of the participants from Russia was more than 20 000 euro, it is more than 1, 5 million rubles.

All the collected funds will be transferred to the research projects. Earlier, VINILO, BEACON and BIOMEDE programs were financed by the fund. This type of research helps to diagnose correctly and choose the right treatment that increases the chance for the recovery for ill children.

Сhairman of the management board

The fight with children cancer is one of the most important goals that face international community. Thanks to the initiatives of Imagine for Margo charitable fund, we also can take part in solving of this problem by making little effort. The charitable race that is organized by the fund every year is a magnificent event that helps not only to draw people’s attention to the problem of children cancer, but also to attract extra funds for its research. I am sure that we make the world better by participating in these projects

The total sum of the donations for the fight with children cancer collected by the participants of International Race was 1 663 074 euro or more than 126 million rubles.

The support of social projects is one the most important business directions of Societe Generale all over the world. Russian companies of the Group take the active part in this process by carrying out the whole range of events all over the country, including the holding of charitable campaigns, the implementation of ecological initiatives, the realization of projects for making the inclusive environment for the people with disabilities, the support of children sport, etc. The development of charity culture and the engagement of the employees in these activities are important directions in the corporate and social responsibility policy of the Group in Russia.

Learn more about the activities of Imagine for Margo fund by following the link.