Up to date. We received two digital communications awards 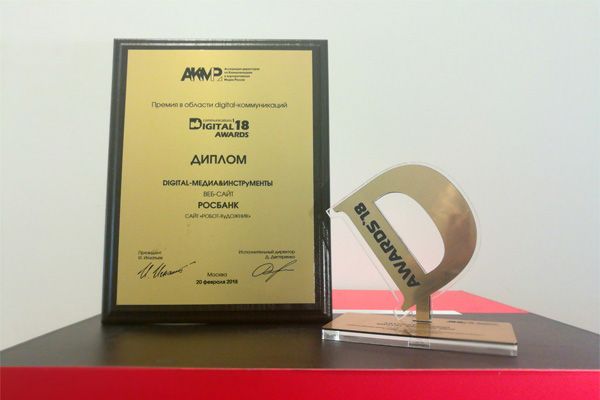 The expert council highly appreciated the company’s contribution to charity by giving Rosbank a statuette in the nomination «Native advertising/Information advertising» for participating in the creation and implementation of flashmob «Confessions Week» in the framework of «Giving Tuesday» project.

For each confession in good deed, made on the project’s page, Rosbank donated 100 rubles to three charity regional organizations. Thanks to digital advertising placement, the event attracted more than 11 000 people.

Rosbank was also awarded with the diploma for the best website in the «Digital-media and tools» nomination and for creating «Robot-artist», the joint project of Rosbank and FANUC Russia, and drawing people’s attention to synthesis of art and new technology.

Robot with the support of 4500 people drew two pictures in Sokolniki park, which could be seen on the project’s website.

Digital Communications Awards was established in 2013. The award organizers are Association of directors on communication and corporate media of Russia and Publishing House «MediaBusiness». The award traditionally marks the most significant achievements in digital-communication area and new different communication technologies and tools. This year 96 applications were submitted for participation in 33 nominations.