We are at our best again! Rosbank got “Bank of the Year” award for the best PR-campaign 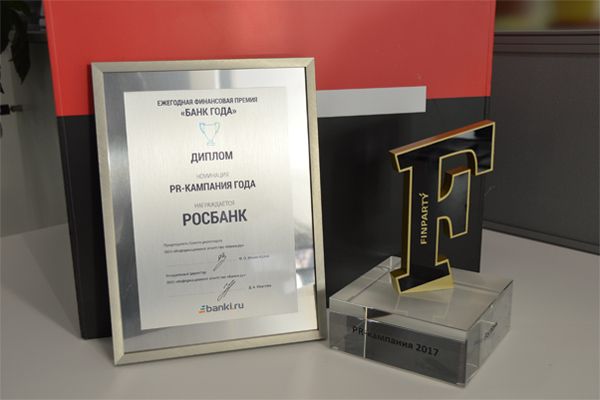 On February 9th Banki.ru held an awarding ceremony for the winners of “Bank of the Year-2017” award. Rosbank became a laureate of the award winning in the nomination “PR-campaign of the Year”

According to Banki.ru, PR-campaign of Rosbank was acknowledged the best due to its versatility, brightness and creativity. The honorable mentions were “Robot-artist” project, a charity run of Societe Generale Group companies in Russia for “Downside Up” fund, the participation in the elaboration of Norman menu in a café chain “Shokoladnitsa”, planting of multilayer flowerbed in “Apothecary Garden”, France Day in “Flacon” and Christmas charity fair in the head office of Rosbank.

“It is a great honor and success to get such a high appreciation of the effort made. The victory in “PR-campaign of the Year” nomination means that we move in a right direction. We will do our best not to lower the bar next year”, Konstantin Artioukh, Deputy CEO of Rosbank.

“Bank of the Year” is an annual professional award founded by Banki.ru in 2007. The aim of the award is to define the best organizations of the Russian financial market following the year results, to submit a trustworthy and unbiased information to clients for the choice of the reliable partner among the companies and to give landmarks for further development for business.