We are building our future now: Rosbank ARCHDAY’19 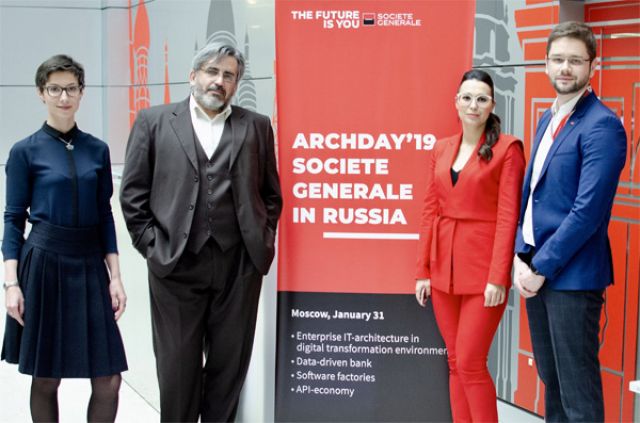 The annual Day of corporate IT-architecture of Societe Generale companies in Russia ARCHDAY’19 was held at two sites – Rosbank Head Office and «Apothecary Garden». The event was organized under the slogan «We are building our future now».

Ilya Polyakov, the Chairman of the Management Board, opened the conference with a speech, where he noted not only the importance of changes implementation continuation and the architects-visionaries contribution to this process, but the role of each employee in transformation programs.

In general, the agenda was eventful and didn’t allow being bored: the employees were devoted to banks’ architecture news and SG Russia joint plans in a few hours, and watched comic videos about work in Corporate Architecture Office between the reports.

The official part continued on strategic seminar that was held at Apothecary Garden – branch of Moscow State University Botanical Garden. Alexey Reteum, Director of Apothecary Garden greeted workshop participants at the very beginning and noted Rosbank and Apothecary Garden productive cooperation since 2016. Thanks to the partnership the hydrangea promenade, shrub mixborder, orchid garden and open-air garden host appeared in the garden. Moreover, Rosbank and Apothecary Garden launched a unique rainwater collection system for watering plants last year. That is why, when the idea to choose an original site for the event was born, everything came together: Rosbank's approach to supporting environmental initiatives, the position of the Apothecary Garden, as well as their friendly and cooperative relations.

Teams of business representatives and corporate architects practiced in creating options for the development strategy of the bank’s architectural landscape, and also held a small competition for the best solution among tropical and winter plants.

After the end of the seminar the winners were awarded prizes, and Artyom Parshin, the landscape architect of the Apothecary Garden, conducted a short tour to the Palm Greenhouse for employees of the Societe Generale Group.